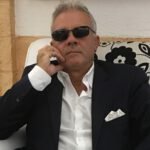 “Learn to like yourself.
What you think of yourself
is much more important
than what others think of you ”
Lucius Annaeus Seneca.[2].

I was born in Rome on the 1961, where I attended the “Giacomo Leopardi” Municipal Elementary School up to the 4th grade and then moved on to the Pontifical School “Pio IX”, where, after middle school, I attended the classical high school up to the 5th gymnasium. In 1977 I entered the “Francesco Morosini” Naval College (now the Military Naval School) in Venice (Italy), where in 1980 I obtained the A-Level in Classical Study.

After my military service as a Complementary Officer of the Italian Navy (Commissariat Corps), in 1982 I started working in the IT field, as it is typical of the 1980s in a small start-up in a garage in Rome.

Having started as a programmer, developing and adapting accounting and logistics programs for computers, my career in Italy in 12 years has led me to carry out the functions of Program Manager.

In 1995 I moved to Germany, to Aachen in North Rhine / Westphalia (NRW), where in 1996 I started my studies at the faculty of computer science (Artificial Intelligence and Mathematics) at the polytechnic (RWTH Aachen), graduating in 2005.

During my studies I worked, always in the IT field, starting my career almost from scratch and reaching the position of Project Manager (Program Manager) again.

During my career in Germany I have achieved, among other things, several certifications in Project Management and Program Management, such as PMP ©, PgMP ©, PRINCE2 © Practitioner, IPMA © Level A.

In 2020 I purchased a square foot (1 square foot, 1 ft2), equal to approximately 929.0304 cm2, of pasture in the grounds of Dunans Castle along with the ornamental title of Laird o’Chaol Gleann. Also acquiring the right to dress the kilt with the corresponding colors (see image on the right). At the same time I have always purchased a square foot in the grounds of Hougun Castle, along with the title of Lord of the Manor of Hougun.[4]

Relatives and friends can see my profile on FaceBook.

Colleagues, clients and anyone interested in my Curriculum Vitae can see my profiles on LinkedIn (in English, registration required) and Xing (in German).

Roberto S. Greco
Lord of the Manor of Hougun 😉 and Laird o’Chaol Gleann 🤣.

[3] The sale of British noble titles is prohibited by the Honors Act (Prevention of Abuses) of 1925. However, what I bought is a so called Manorial Lordship, which is not an aristocratic title, but a semi-extinct form of landed property. Lordship in this sense is synonymous with property. Therefore it cannot be indicated on a passport and does not give the right to a coat of arms in the sense of heraldry.
The designation of Laird in Scotland or Lord in England is based on an inheritable property that has an explicit link to physical land. The stock cannot be bought and sold without selling the physical land. The title also does not entitle the owner to sit in the House of Lords, as it is not a noble title, but rather a courtesy title which means landowner with no other rights assigned. The manor’s title Lord is likewise a feudal title and is legally eligible for sale. [dobson2016], [baronage2020, Page 12].